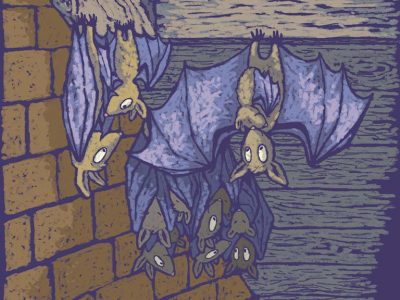 I have given birth to a beautiful baby! His name is Ben. Everyone says he looks just like me. I feed him with my own milk and leave him in the roost every night while I fly out to eat insects. But don’t worry he is safe, he hangs out with other pups, our roost is like a bat creche! He’s a hungry baby so I come back every couple of hours to feed him. When he was born his eyes were closed and he had no fur but his eyes opened after a couple of days and his fur grew very quickly. He squeaks a lot but he doesn’t know how to fly yet. He’s the cutest!

It really is busy in here with all the babies learning to stretch their wings and scrambling around playing. Ben is learning how to fly inside the roost. He was a bit scared at first but now he’s getting really good at it. Soon I’ll bring him outside and show him how to catch insects. He’s going to love eating those yummy, crunchy bugs! Did you know we eat thousands of insects every night?

I’ve brought Ben, my baby who was born just six weeks ago, out to catch his first insect! He had to follow close behind me so I could show him how to find them in darkness using sound. He had to learn how to echolocate by listening to me. Trying to make sure those bugs don’t escape at the last minute can be really tricky! He’s doing really well and loves to eat midges and moths. Ben will soon want to leave and find his own home, I will miss him. My daughter Isabelle, who was born last year stayed in my colony and had her first baby this year (so that means I’m a grandmother and a mother!). The boys usually want to be independent and most of them leave home after their first summer.